Your free period or previous subscription has now expired. Please renew your OutDoors Pro subscription below to access all OS Maps for the whole of Great Britain on the OutDoors website.

How does this work?

Uploaded by jrhughes on May 26, 2021
Region: United Kingdom

Turn off the A82 along the track towards Achaladair Farm where there is a walkers car park just 150m from the main road. This walk can be done in either direction but a clockwise circuit gives perhaps the finest views ahead, so walk along the track to the old car park near the farm. Leave the old car park over to the left through a gate. The grassy track runs through a field beside a stone wall before passing through a gate to reach a ford over the Allt Ur. This can usually be crossed with dry feet but it may be impossible in spate (in which case there is a bridge upstream just above the farm). Continue on the track; a sign indicates a fork in the route. You can either turn right off the track and follow a marshy path through the woods, or alternatively keep on the track and cross the bridge over the Water of Tulla; the latter route is recommended. You'll see the ruined farm of Tom na Grobh ahead; keep on the main track by turning right. There are great views of the days mountains across the Water of Tulla. After another two kilometres leave the track, heading down to the right to cross the river - note that the footbridge shown here is currently down. Crossing the river would be impossible in spate conditions - in such conditions it would be better to remain on the marshy route on the south side of the river. 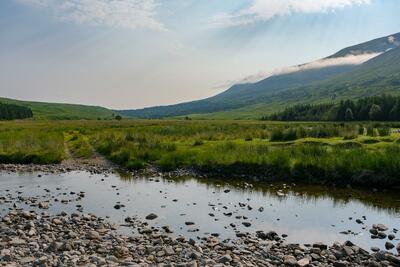 Across the river the route enters the Black Wood of Rannoch. This is a celebrated remnant of the ancient Caledonian forest which once covered most of Scotland, with a mix of fine Scots pines lower down and birches higher up. The path heads to the left, keeping well above the river; it soon becomes boggy underfoot in parts and gradually fades out. Further on, aim for the top corner (to the right) of a fenced area. The verdant growth of the trees inside the fence demonstrates how well the wood here could regenerate if there were fewer deer. There is no longer any path; aim south to reach a gate and pedestrian underpass beneath the railway a short distance to the west of where the Allt Coire an Lochain passes under the line. The underpass is very low and most walkers will be hoping no train crosses whilst they are underneath; as part of the West Highland line the railway is considered the most scenic in Britain. Follow the path alongside the deer fence but ignore the two stiles further on and continue uphill close to the stream. There are great views through to the right across to Beinn Achaladair, looking magnificent above the pines. 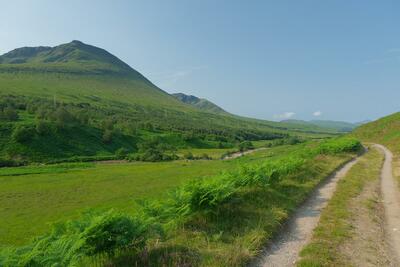 The path continues by the cascading stream up into Coire an Lochain. Higher up look for a good place to cross the stream and then head southeast up the open slopes to the left of the cliffs around the head of the corrie. As height is gained the views back become increasingly beautiful, initially across Rannoch Moor and later down onto Lochan a'Chreachain - a stunning lochan cradled by the corrie headwall. The north ridge of Beinn a'Chreachain is reached at about 900 metres. Turn right along the fine ridge which curves left just before reaching the summit. 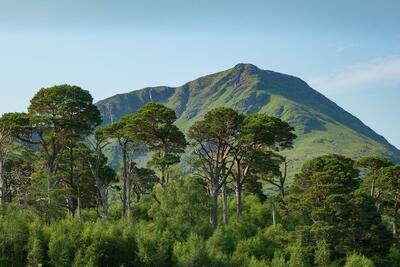 The summit of Beinn a'Chreachain is marked by a well-built cairn at 1081 metres, the highest peak in the Beinn Dorain range of four Munros. It is a very fine viewpoint; Rannoch Moor looks impressively wild and empty, backed by distant Ben Nevis and with a great view up the length of Loch Ericht. Southeast is Loch Lyon, with Ben Lawers the distant dominant peak surrounded by its many satellites. Continue the walk by descending steeply towards the bealach with the neighbouring summit of Meall Buidhe. The descent is initially stony but becomes grassier as the bealach is reached. From here a clear path heads off to the left, appearing to contour round Meall Buidhe; this path is not continuous however and it is probably easier as well as more enjoyable to follow the grassy ridge over this minor summit, making the most of the views over Rannoch Moor. Beyond Meall Buidhe the ridge descends to the Bealach an Aoghlainn. 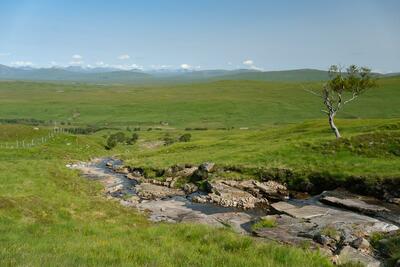 The ridge leading up the other side towards Beinn Achaladair looks (and is) very steep in its lower section, but there is a path. This starts a little to the right and winds its way up the steep grass with a couple of straightforward rocky sections to negotiate. Higher up the slope eases and curves to the right for the final climb up to Beinn Achaladair's summit. At 1036 metres the position of the cairn right by the edge of the northern precipices makes it the finest viewpoint but the actual summit is slightly further on and is 1038 metres. There is no better place to look out over the vast desolation of Rannoch Moor, with the Black Wood as a foreground far below, whilst further left is an aerial view of Loch Tulla backed by mighty Stob Ghabhar. Continue the walk along the now gentle grassy ridge which gradually curves round to the south, ascending slightly at one point before continuing down to the bealach above Coire Daingean. From here it is possible to continue the walk by ascending the ridge ahead to Beinn an Dothaidh, but most walkers will have had enough. A fairly clear path descends north from the bealach into Coire Daingean, negotiating a route through the rough hummocky ground. 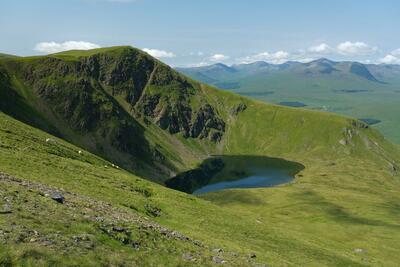 Further down the path crosses briefly to the east side of the burn below some pretty waterfalls before crossing back to the west side just beyond a steep section. The going is boggy in places but the path is fairly clear; now continue above the stream, crossing one feeder which has a steep rocky bank on the far side. The path - which is now both eroded and boggy - otherwise continues easily down Coire Achaladair. Towards the bottom the path runs to the left of a fenced area and then crosses the railway via a bridge in a picturesque patch of woodland. Looking back Beinn an Dothaidh looks magnificent. Continue down until a signpost indicates where to bear left on a boggy path over humpy ground to return to the car park.